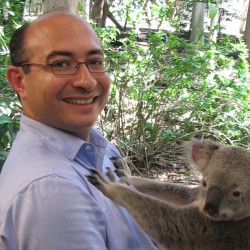 Purang Abolmaesumi received his BSc (1995) and MSc (1997) from Sharif University of Technology, Iran, and his PhD (2002) from UBC, all in electrical engineering. From 2002 to 2009, he was a faculty member with the School of Computing, Queen’s University. He then joined the Department of Electrical and Computer Engineering at UBC, where he is a Canada Research Chair, Tier II, in Biomedical Engineering and a Professor, with Associate Membership to the Department of Urologic Sciences.

Dr. Abolmaesumi is internationally recognized and has received numerous awards for his pioneering developments in ultrasound image processing, image registration and image-guided interventions. He is the recipient of the Killam Faculty Research Prize and the Killam Award for Excellence in Mentoring at UBC. He currently serves as an Associate Editor of the IEEE Transactions on Medical Imaging, and has served as an Associate Editor of the IEEE TBME between 2008 and 2012. He is a Board Member of the International Society for Computer Aided Surgery, and serves on the Program Committees of the Medical Image Computing and Computing and Computer Assisted Intervention (MICCAI), International Society for Optics and Photonics (SPIE) Medical Imaging, and the International Conference on Information Processing in Computer Assisted Interventions (IPCAI). Dr. Abolmaesumi is the General Chair of IPCAI 2014-16, has served as Program Chair of IPCAI 2012 in Pisa and Workshop and Tutorial Chair of MICCAI 2011 in Toronto, and is currently server as a Chair of Workshops for MICCAI 2015.